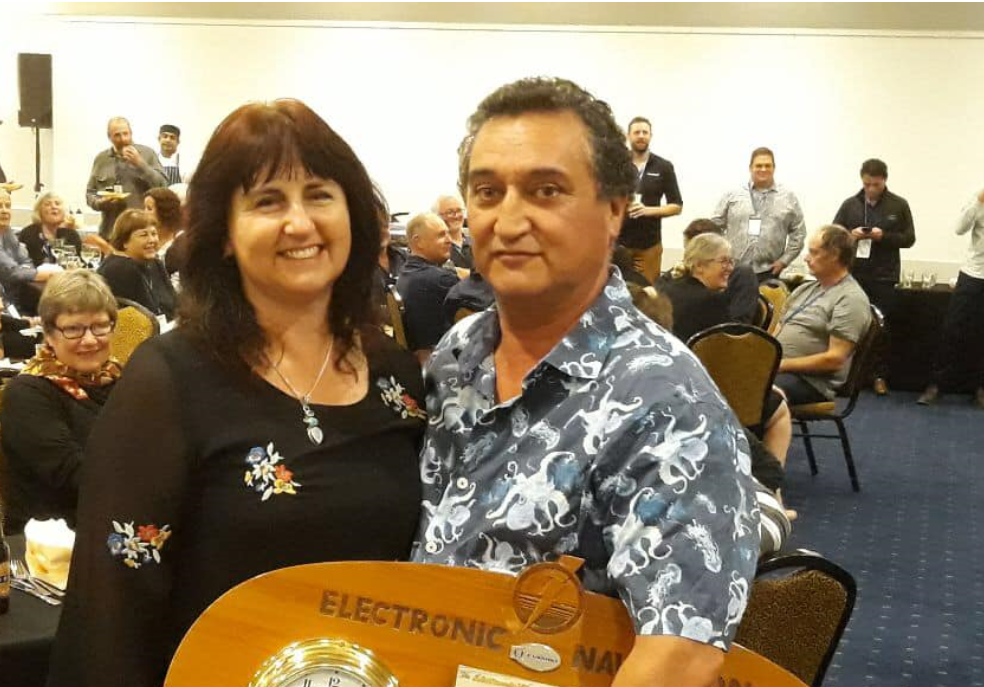 Curly Brown - a skipper who doesn’t leave you guessing

Curly Brown’s passion for the fishing industry is clear. Get him talking and it’s not long before the old Rolling Stones line comes to mind: “If you start me up I’ll never stop.”

Issue after issue comes up, he’s got strong views on all of them and he doesn’t want to get off the line until he’s had his say.

He took the same approach in a lengthy, spirited submission to Your Fisheries – Your Say earlier in the year, concluding: “I feel very passionate about the fishing industry and its misconceived place in New Zealand society … I felt compelled to complete this process because I would find it very difficult to meet with other fishermen and tell them I didn’t manage it.”

Brown runs the last surviving New Plymouth trawler, Receiver, mainly targeting gurnard – and is plagued by an abundance of snapper that he can’t avoid but can’t make any money from.

That’s just one example of the frustrations he faces in his working life. He will talk forever on the imperfections of the Quota Management System, the flaws in electronic monitoring and the plan for cameras on boats, the ageing of the inshore fleet and its owner-operators.

He’s especially spurred by what he feels is a totally unjustified public view of fishermen and their contribution to New Zealand.

“We are so badly misrepresented in this country,” he said. “I’m absolutely spewing on the way we’re perceived, often in the New Zealand media, particularly by eNGOs, pressure groups, recreational fishers, even MPI to a certain extent.

“I’m a New Zealand Maori. I can’t say that I’ve ever been the subject of racism of any significance, but the prejudice I encounter because I’m a commercial fisherman … we just get absolutely slaughtered, and most of it is shockingly ill-informed nonsense.”

Citing the example of the claims around seabed damage caused by bottom trawling, Brown said only 10 percent of New Zealand’s EEZ had ever been trawled. “Of that 10 percent, about 90 percent of it is completely fallow. What other farm in New Zealand is operated like that?”

He said 60 percent of New Zealand’s native biodiversity has been irretrievably displaced by agriculture, horticulture, forestry, transport links, urban sprawl and domestic dwellings, with agricultural livestock and their feed both introduced to New Zealand.

“It is arguable our national parks are in a worse state than our seabeds. We’ve got gorse, pinus radiata, rats, mice, ferrets, possums, thar, goats, pigs, deer, wasps, old man’s beard, didymo in the rivers and introduced trout.”

“We haven’t had to ruin or completely displace the native biodiversity to farm it,” he said.

“We are seen as environmental vandals – how much water do we use out of the aquifers? How much fertiliser do we use? How much pesticide and insecticide?”

“Commercial fishermen are the conduit by which 4.3 million New Zealanders have access to this wonderful resource. It seems like there is a perception commercial fishermen catch fish for selfinterest only. Some of it is exported, which helps our GDP.“

Brown said more than 50 New Zealand bird species had become extinct since man arrived, while not a single marine fish species has been made extinct by commercial fishing in New Zealand or anywhere in the history of the planet.

“The reason is simple – what becomes extinct is not the fish, it’s the fishermen. You get to the point where a fishing industry is no longer sustainable, and it collapses.

"That’s not what fishermen want. We’ve got more at stake in having healthy fish stocks than anyone.

”He said the Quota Management System has been great for fish stocks, but there were real issues with its inner workings.

Snapper, a favoured table fish, was “an absolute plague – like rabbits in Central Otago”. It was so plentiful that he couldn’t avoid catching it, and had to land it with the lease cost similar to what he got paid for the fish.

This was a good illustration of why the QMS needed a re-think, Brown said, with more attention needed on the anomalies it put in the path of the commercial sector.

The days of a keen young fishermen being able to buy a boat, get a licence and go fishing were practically over, he said.

ccess to fishing rights was through Annual Catch Entitlement, and with 90 percent held by about five fishing companies, with fishing plans already allocated to existing fishermen entry into the industry was incredibly difficult, particularly in provincial areas without large fishing hubs.

In his 27 years skippering Receiver the New Plymouth trawler fleet had shrunk from about eight boats to one, with just one other trawler domiciled in the Central West Region (FMA8).

Brown and Hayman Fisheries has owned Receiver since 1984 and over the years had spent “millions” on it, Brown said. It was in good condition for its age, but it was said that a healthy fishing fleet replaces its vessels about every 10-12 years.

This was one of the “really serious issues” facing the industry, he said.

“Fishermen have lost access to the fishery by the lack of fishing quota ownership. Due to IEMRS our intellectual property is no longer exclusive.”

Unsurprisingly he’s also got a firm view on the proposed introduction of mandatory cameras on all New Zealand fishing vessels.

If a sector of New Zealand society was twice as likely to be targeted for any type of offending it would be represented twice as much in offending statistics and this would totally misrepresent the sector.

“With IEMRS and cameras our persecution will be complete. This is the definition of totalitarian oppression. Why us? Could not such scrutiny be levelled at the premises of the people responsible for the distribution of meth in this country? I think their lawyers and civil libertarians would come to their support.

“We distribute native wild caught free-range organic high-protein low-fat brain food that grows the bodies and minds of New Zealanders. If the distributors of meth were scrutinised to the same degree as the fishing industry the Government would not have the audacity to make them pay for the cost of their surveillance like they do us, so it appears to me our social status is lower than these people.”

Brown said If there was to be complete scrutiny by IEMRS and cameras “you’re going to find every single infringement the commercial fishing industry may commit no matter how technical, while every other industry in New Zealand is not going to have the same level of scrutiny. That is absolute bias and prejudice against New Zealand fishermen – a breach of our civil rights.”

Instead, there could be a percentage of boats carrying cameras on a rotating basis, with obligatory camera use for operators found to have committed offences, or working in especially sensitive fisheries, he said.

“I have always been an environmentalist and see no conflict between this and my fishing. We have to put more emphasis on the work fisheries scientists are doing and not water down their insightful conclusions by the misconceived views of the unqualified.“

Brown has been a commercial fisherman since 1981 – and was going out on his father’s boat long before then – but his involvement with the Federation got really going 15 years ago when he attended the conference for the first time. It made a big impression.

“I came across people who were older than me – they were role models. I wanted to be a successful businessman like them, and I knew it was possible because the evidence was right in front of me.”

He said it had been great to become friends with other fishermen working around New Zealand through the annual get-togethers.

“You form a strong bond with people and it can be really helpful around bits and pieces that might be affecting the industry, and for those two days a year you’re right at the interface with other entities involved with the fishing industry, like MPI, Maritime New Zealand, NIWA scientists and other service providers for the industry. That’s really important also.”

It was a real shame, he said, that some fishermen reaped the benefits of the Federation’s work without becoming active members.

“It’s a golden opportunity that those people are missing out on. I wouldn’t be half the fisherman I am if I hadn’t had that relationship with the Federation.”

With an ageing and shrinking group of owneroperators still in business, it became more important for those remaining to be involved, Brown said.

After all this it’s both a surprise and a disappointment to learn that he’s planning to get out of fishing as soon as he turns 60, less than five years from now.

Why? With so many regulations and formalities to deal with, many of which he believes are unnecessarily complicated, and so much public criticism, which he thinks is almost all unjustified, the business has lost its appeal.

“I’ve had enough,” Brown said. But there’s still a few years left in which he’s guaranteed to have plenty more to say.

After a planned 30-minute conversation has stretched to an hour, he finally agreed to end the call.

“That’s the short version,” he said. “Sometime when you’ve got a spare week, I’ll tell you the full story.” 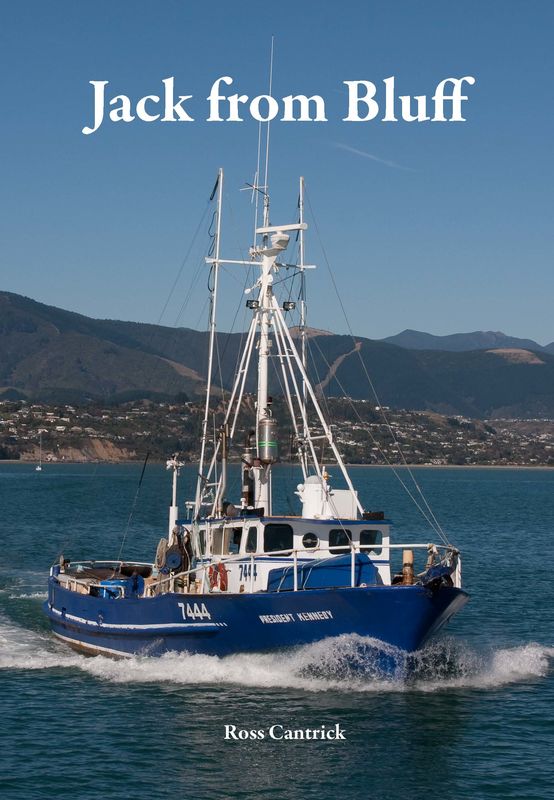